NZ Cricketers Are Collecting All the Awards 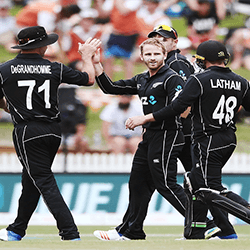 It was recently announced that BJ Watling, wicket-keeper for the Black Caps, and Neil Wagner, his bowler teammate, have both been selected in the International Cricket Council’s Test Team of the year for the first time. Fellow wicket-keeper Tom Latham has been included on the list for the second year running, and Kane Williamson, batsman, and bowler Trent Boult also made the cut.

This honour could not have come at a better time for the Cricketing quintet, all of whom took part in the recent Test Series loss to Australia.

Watling’s biggest achievement last year was the double century he scored against England at November’s Mount Maunganui game which saw him set his team up for a Test and Series win. He batted for 11+ hours and made 205, his highest Test score by 60+ runs. He also played a large role in the success of the team’s previous game, making 105 in the win in Colombo against the Sri Lankans.

Wagner took 43 wickets, with a 17.81 average and a 27.6 strike rate, in 2019, making it the best return he has made in any calendar year. He took four five-wicket bags in the 11 innings he was on the field. This total was made up of 5-47 against Bangladesh in Hamilton in February, 5-45 against the same team in Wellington in March, 5-44 against England in November at Mount Maunganui, and 5-124 against the English in Hamilton 7 days later.

In other good news, New Zealand-born all-rounder and vice-captain of the England Test team Ben Stokes collected the Sir Garfield Sobers Player of the Year trophy.