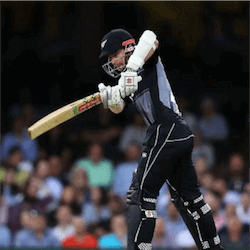 A Rough Start for the Black Caps

After losing their World No 1 T20 status, the Black Caps have even more to answer for. In the first match of T20 tri-series, New Zealand fell at the hands of the Australian’s who all but decimated the top-order batsman to win by 7 wickets despite the hour-long rain delay. Having won the toss Australia sent New Zealand in to bat as the sky started to cloud over. The Black Caps were racing the sun at Sydney Cricket Ground in a bid to be the first to rack up a respectable score.

The visitors had a mental advantage of being the 2nd ranked side in the world compared to their 7th ranked opponents. However, it seemed that the recent BBL action had the Australians firing on all cylinders. From the first over, it was evident that New Zealand was struggling with the intensity and accuracy of the Australian bowling.

For a side that produced some epic performances over the summer, the batting was nothing short of dismal. Most striking was the fact that New Zealand conceded 45 dot balls, with one period including 11 in a row. Kane Williamson, who normally gets the side off to a solid start, struggled to amass 8 runs from 21 balls. Ross Taylor fared no better, hitting 24 off 35. Colin de Grandhomme was the only batsman who looked even remotely capable of generating any spark.

The all-rounded cracked 38 runs of 24 balls which included 3 sixes. Unfortunately, that is where it ended for New Zealand. As for the Australian bowlers, not a single blower conceded more than 7 runs per over. The Black Caps eventually stumbled their way to 117 runs for nine wickets at the end of their 20 overs.

Rain then delayed the match by more than an hour, forcing the hosts to take on a Target of 95 runs from 15 overs according to the Duckworth Lewis method.

After losing 2 early wickets, the hosts got into their grove with both Chris Lynn and Glen Maxwell putting in a good knock. Lynn blasted 44 off 33 deliveries while Maxwell ended not out 40 from 24 deliveries. The partnership ensured Australia maintained control, easily reaching the required runs with 21 balls to spare. Two games remain in the tri-series and a chance for NZ to redeem themselves.