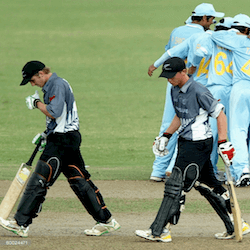 New Zealand Out Of U19 Cricket World Cup

As if the thrashing of the Silver Ferns by England’s squad of Roses wasn’t quite enough drama for one week, the New Zealand’s U19 cricket squad has effectively crashed out of the U19 Cricket World Cup after having been sucker-punched by 202 Afghan-runs.

Afghanistan may have been considered to be on the rise as far as especially junior cricket goes, but it was certainly not anywhere near the cards that they would beat New Zealand by a land-slide. Worst of all, New Zealand had a really strong start to the tournament. Now all that’s left is to sit in the corner of contemplation, perplexed at what had gone wrong.

A total of four players made it all the way to between 60 and 70 for Afghanistan, with Azmatullah Omarzai planting the final death stake in the chest of the New Zealand side by smashing up a total of seven sixes.

Spin-bowler Mujeeb Zadran proved to be the chief destroyer of New Zealand’s peace by sticking it to New Zealand batsmen Finn Allen, Rachin Ravindra and Jakob Bhula. No one managed to pass 13 runs, leaving New Zealand’s hope in pieces.

New Zealand finally got to go home after Afghanistan played every last man out for 107 runs.

If there is going to be a sympathetic ear listening to New Zealand’s plight, then it will be that of South Africa. Pakistan on Wednesday smashed the South Africans’ hopes and dreams by winning their match in Christchurch by 3 wickets.

Batsman and wicket-keeper Wandile Makwetu gave it all he had but could only manage 60 off of 65 balls. No one else came even close to Makwetu’s already average overall performance.

In Pakistan’s corner of the fight, it was a different ball-game altogether. Ali Zaryab Asif stole the day for Pakistan, with 74 not out off 111 balls.

Given Pakistan’s recent history, no one expected it to be a straightforward and uncomplicated chase.  Zaryab struggled at first, but finally found a worthy ally in Saad Khan, who proved able to provide the much-needed necessary support.

It would seem that the decision to bowl first was a good one on Pakistan’s part,  despite the fact that there was some uncertainty as to how the pitch would play.

If Hassan Khan had his hopes on making early inroads then disappointment at the outcome certainly was a long way off.