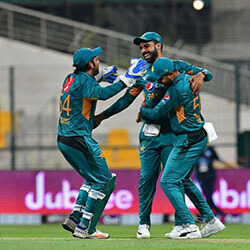 Top-ranking Pakistan have recorded a two-run victory over the New Zealand team in the opening game of the three-match Twenty20 series.

After winning the toss and deciding to bat, Pakistan’s captain Sarfraz Ahmed and Mohammad Hafeez helped the team earn 148-6. New Zealand’s Ross Taylor and Tim Southee only managed to grab 14 off of bowler Shaheen Afridi, and the team eventually ended the game 146-6, just two runs behind their opponents. But it was a solid performance for the New Zealand team, who gained the leading position twice. The game was also marked as New Zealand’s first since being absent from international cricket for seven months.

UAE conditions were in Pakistan’s favour as the team decided to take the match slow, and their patience eventually paid off. Despite this, New Zealand maintained solid fielding, with Corey Anderson, (who was playing his first international match since the 2017 Champions Trophy), Glenn Phillips, and Southee claiming fantastic catches as they slowly started taking the score back from Pakistan.

But this ended abruptly when Faheem Ashraf and Imad Wasrim gained 20 off of the last seven deliveries, which pushed the team’s final set of points to 1486.

Pakistan’s top bowler came in the form of Hasan Ali, who completed his stint on the pitch with 3-35. New Zealand’s best bowler, Adam Milne, finished with 2-28. New Zealand are now set to play another two matches in Dubai, which will be followed by one-day internationals, and then three Tests that will come shortly after.