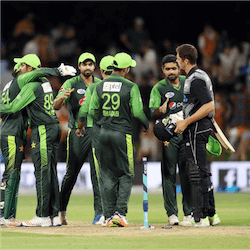 Pakistan Claim No. 1 T20 Status with Win Over Black Caps

While some are still deliberating on why few New Zealanders got picked in the IPL auction, many cricket fans turned their action back home to the epic T20 battle taking place at Mount Maunganui. Having levelled the series, Pakistan felt they had a point to prove and were gunning for a second win in a row. As it turns out, 18 runs were all that was needed for the visitors to take down the mighty Black Caps, win the series and leapfrog New Zealand as the number 1 ranked T20 side in the World.

Batting first, Pakistan quickly realised that it was a friendly wicket and racked up a total of 181 runs in their allotted 20 overs. At the top of the order, it was Fakhar Zaman who got the team going, hitting 46 runs of 36 balls. After a slight slump in the middle order, Umar Amin as able to lead a late charge, picking up another 58 runs in the final 4 over.

However ready New Zealand felt for the run chance, they Black Caps only managed to scrape together 163 runs for 6 wickets in their 20 overs. The defeat at the hands of the Pakistanis followed shortly after a massive 48-run loss in the second game of the series. This was a shock to most as New Zealand easily took the one-day series and all but demolished the visitors in the first T20.

A Lazy Chase and the End of a Winning Streak

The two defeats come at a time when New Zealand were riding high on a 13-match winning streak in every format of the game against both Pakistan and the West Indies. While it was bound to happen sometime, the loss of World No 1 status is hard to accept and understandably puts a damper on the preparation for next month’s triangular series against England and Australia.

The Architect of New Zealand’s downfall was Zaman, and whether you believe he was caught out fairly or not matters little, owing to the fact that he got the ball rolling and while Amin did his bit at the end. When New Zealand came out to bat, it almost appeared as if they were not mentally prepared for the 9 an over run required run rate.

Things got intense when Kane Williamson was dismissed for 9, while the stoic Martin Guptill was the only one able to push the bowlers around a bit. By the time Guptill departed on 59, the required rate jumped to 13.57. Ross Taylor put in a brave effort, and for an instant it looked like a comeback was possible. But in the end, it was just a task too big for the Black Caps who were left short and wanting.