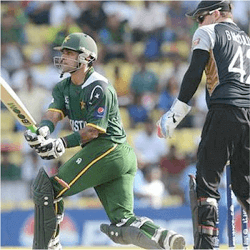 The highlight of the second Test match between Pakistan and New Zealand in Hamilton was day three. Babar Azam had to deal with running out of batting partners just ten runs short of a first Test 100 for Pakistan. Heavy rain unfortunately washed out the majority of the third day’s play, with slightly more than 38 overs being possible. During that time Pakistan was bowled out for 216, giving the home side a lead of 55 runs in their first innings.

In what is only his second-ever Test match, Azam was left high and dry on 90 not out as he took the position of top scorer, but ran out of batting partners at this point, and was thus denied his maiden Test ton as a result.

Tim Southee really stood out in terms of his role as bowler for the New Zealand team, receiving his fifth five-wicket haul in the Test format, managing to finish up with a remarkable figure of 6/80.

Rain washed the Seddon Park game out just before lunchtime, causing the players to lose almost three hours of time overall. When the weather cleared enough to allow play to start again, Pakistan recommenced the Test on 76/5.

In the morning session, Azam managed to amass a sixth-wicket partnership totalling 74 runs with Sarfaz Ahmed, 41, before flailing at Neil Wagner’s, 3/59, wide delivery, and being caught at second slip by Jeet Raval.

An enthusiastic spectator managed to not only spill his drink, but miss the cricket ball as well as he tried for a catch in the crowd in Hamilton.

There was additional lower order resistance from the hands of Sohail Khan, who managed to club 37 off 44 balls, managing to hook two sixes as well. However, when the drizzle began, Pakistan had already slid further, to a total of 200/8.

At one point play briefly resumed, and Southee managed to quickly clean up the Pakistani tail, resulting in Kane Williamson’s team starting the fourth day with a useful lead in the first innings, and all ten wickets still intact.

If the New Zealand cricket team manages to get a draw at a minimum for this Test match, it will be sufficient for them to attain the first series win the team will have seen over Pakistan since back in 1985.