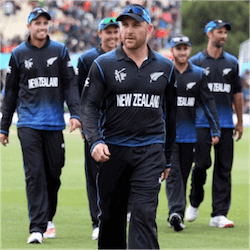 Black Caps coach Mike Hesson has every right to feel disappointed after the 3-2 ODI series loss to South Africa; thousands of New Zealand cricket punters are gutted too. After wins at home to Australia and Bangladesh earlier this year, New Zealand had the chance to improve their third place on the ICC ODI rankings at the expense of the top-ranked Proteas and the Baggy Greens at No. 2.

What makes the loss harder to bear is the flashes of brilliance the Black Caps showed in the two matches that they won. Ross Taylor’s unbeaten ton in Christchurch set up a 289-run total and a 6-run victory in the second match, while Martin Guptill’s magnificent 180 not-out in the fourth ODI in Hamilton took New Zealand to an imperious 7-wicket win with 30 balls to spare.

Guptill, Taylor and Kane Williamson delivered with the bat in the face of some brilliant South African bowling from Rabada, Tahir, Morris and Phehlukwayo. But Hesson believes his team got rattled in high-stress situations in the three matches that the Proteas won: by 4 wickets in Hamilton, 159 runs in Wellington, and 6 wickets with 106 balls remaining in Auckland’s disastrous decider last Saturday.

In post-series interviews, the coach acknowledged the Black Caps for going toe-to-toe with the best ODI side in the world, but admitted that decision-making under pressure and some clumsy batting had affected New Zealand’s performance in the series.

No doubt his focus for the three Test matches against the Proteas, the first of which began in Dunedin on Wednesday, will be on the team keeping cooler heads when the screws are on. With New Zealand only 9 ICC rating points behind South Africa, respectively fifth and third on the ICC Test rankings, the Test series is likely to provide plenty more intense cricket action for betting fans.

The next chance to rate the Black Caps in ODIs will be during the Tri-Nations Series in May, against Bangladesh and hosts Ireland. Barring major upsets, this should be New Zealand’s tournament. Those who want to see how they stand up to top-ranked teams will have to wait until June, when the ICC Champions Trophy takes place in England and Wales.