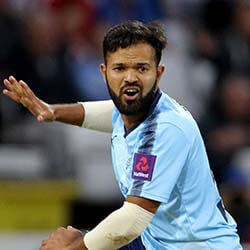 Azeem Rafiq is once again having it out with Yorkshire. The former club cricketer is now accusing the county of “giving a green light” to racism by refusing to take disciplinary action against its employees and players.

Rafiq became angered after the club announced on Thursday that it had concluded its internal investigation into the allegations, and that no reason for disciplinary action could be found.

While the club released a summarised version of their report on September 10, Rafiq on Thursday bemoaned the fact that he still hasn’t been furnished with a copy of the full report. Rafiq played two spells with Yorkshire between 2008 and 2018.

According to a statement issued by a spokesperson of the former Yorkshire cricketer this week, particular issue is being taken with the fact that the club will not be taking any disciplinary action despite its former admission that Rafiz had indeed suffered bullying and racial harassment during his time there.

The statement furthermore called for action on the part of board members.

Yorkshire’s own statement claims that the club is left with much to be learnt from the report, and notwithstanding the particular findings. A spokesperson said it remained important for players like Rafiq to raise issues if and when they arise as this allows Yorkshire to draw guidance from the recommendation of its internal panel of advisors.

Also involved is the England and Wales Cricket Board. When asked for a full copy of the report back in August, the board responded by saying the report will form part also of its own regulatory processes and that those are anticipated to take time.