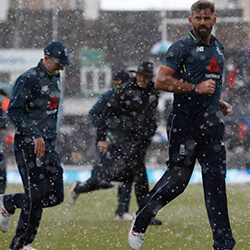 England first one day international where they were to face Pakistan was officially called off due to persistent weather that swept The Oval. The weather saw the game first shorted to 47 overs a side, and another delay pushed it down again to 41, with the heaviest rains leaving the outfield too slick to allow any more play. Pakistan had reached 80-2 in the first 19 overs that they were still able to play.

English pace bowler Jofra Archer proved to be a solid competitor, and showed his skills ahead of the World Cup with his aggressive skills on the pitch. The second match between the two teams is still upcoming, and will be played at Southampton.

Openers Jason Roy and Moeen Ali are currently absent due to injury, the latest cancelled game could have been a chance for players Joe Denly and James Vince to have a chance of entering the official 15 man team for the World Cup, but neither had the chance to prove their skill on the field due to the heavy rain. Archer, however, did reinforced the notion that he will be replacing one of the current players after he managed speeds of 93mph, bowling with incredible accuracy that wasn’t run off of the bat until the 19th delivery.

Liam Plunkett, the replacement for Archer, conceded almost seven runs in one over, but he caught Babar Azam behind to leave Pakistan with a score of 45-2.