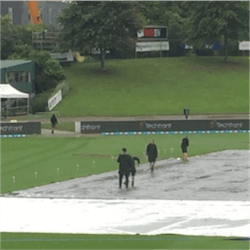 Black Caps captain Kane Williamson was wide awake in the early hours of Wednesday morning, listening to the sounds of rain ruining New Zealand’s chances of winning a notable test match against the Proteas. His counterpart Faf du Plessis would have been tucked up in bed, grinning at the thought of being saved from certain defeat.

Having heard the bad news at 4am, Williamson was well aware that the unrelenting rain in Hamilton would cost the Black Caps a test victory and the loss of the series. Play was officially abandoned at 1:20pm on the last day of the final test between South Africa and New Zealand. The result was a draw, meaning that the three-match series went to the Proteas with a single win in the bag. With the Proteas 95 runs away from the Black Caps first innings score, New Zealand needed just five wickets to win the final test and level the series 1-1.

Speaking to the press, Williamson said that he was hoping the rain might stop or fine up a bit. He continued saying it extremely frustrating coming into the final day with everything to play for. South African Captain Faf du Plessis admitted that the rain came at a terrible time for the Black Caps. According to him, it would have been a fair assessment to say that the rain saved the Proteas.

A Missed Chance to Level the Series

While Du Plessis admitted they were on the brink of defeat, the captain still had a lot of belief in his team. The Proteas have been in similar situations before and managed to overcome them. Du Plessis was still holding his wicket overnight along with Quinton de Kock, which meant that anything could have happened on the final day.

New Zealand was on the brink of claiming one of the most notable test wins in the last decade. This would have been their first test win over South African in 13 years and their fifth overall. Since their previous victory in 2004, the Black Caps have lost 10 matches and drawn a total of 5 against the Proteas. While they are certainly frustrated with the missed opportunity, Williamson said that there were some positive things to take away. He said that the final test was possibly one of their best performances of the summer, especially considering they were missing Tim Southee, Trent Boult and Ross Taylor.