Reiffel’s Knock Cause to Rethink 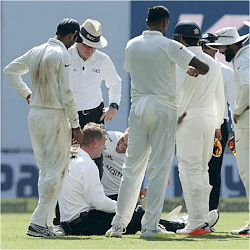 Australian cricket fans had their hearts in their mouths last week, when umpire Paul Reiffel had to be taken for a scan after being struck in the head by the ball on day one of the fourth England/India Test in Mumbai. The former fast-medium seam bowler, who featured in Australia’s 1999 World Cup-winning side, has happily been pronounced clear of any lasting damage, but still missed the rest of the Test, after being advised by doctors to rest.

Reiffel, standing at square leg, was felled in the 49th over of England’s first innings by a lobbed throw-in from Bhuvneshwar Kumar in the deep. The Indian fielder was returning the ball after a single from Keaton Jennings, who went on to make his ton on debut. With his back to Kumar, Reiffel didn’t see the throw, and took a scary blow to the back of his head. Play stopped as the stricken umpire fell to the ground clutching the injury, and fellow on-field umpire Bruce Oxenford rushed to his aid, followed in short order by England’s medical staff.

After a 12-minute delay in the post-lunch session, during which Reiffel was treated on the field and then taken off to hospital, South African umpire Marais Erasmus left the TV umpire post to replace him. England went on to make 228/5 by close of play. However, despite posting a first-innings total of 400, India’s response of 631 proved overwhelming, and they eventually clinched the match, and the series, by an innings and 36 runs.

While Reiffel’s injury had a happy ending, for him if not for England, the accident has refocused attention on calls for cricket umpires to wear more physical protection. When officiating at T20 matches, Greenwood himself already wears an arm protector, and several other umpires are adopting protective gear in this lightning-fast version of the game.

But given the nature of a cricket ball, and the speed with which it is bowled, smacked and thrown around the ground, it appears that some form of umpire protection is appropriate in all forms of the game. Umpire helmets, at the very minimum, would be a sensible way to avoid mishaps like Reiffel’s, or worse.