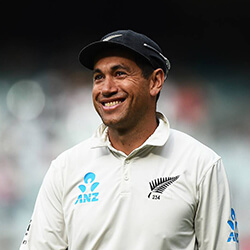 Black Cap batsman Ross Taylor has been honoured with the Sir Richard Hadlee Medal for the third time now, claiming the country’s top honour on the last day of the New Zealand Cricket Awards for 2020.

Due to lockdown continuing in a bid to stave off the devastation of the novel coronavirus COVID-19, the award ceremony was a virtual one this year. It additionally saw Kim Cotton, the Canterbury umpire, rising sharply through officiating ranks as she was recognised with the NZ Cricket Umpire of the Year Award, and Tim Southee got judged as the International Test Player of the Year.

It’s been a season of milestones for Taylor as he helped take his One-Day International team to a second successive Cricket World Cup Final, bested Stephen Fleming’s All-Time Test Runs scoring record for us, and also became the first player to be involved in 100 International Games in each of the three formats.

The gifted 36-year old player amassed an astonishing total of 1 389 runs across One-Day Internationals, Test Matches, and Twenty20 formats. It was an incredibly busy season for him, seeing him appear in all but one of the 32 Internationals the Black Caps played.

The virtual presentation of the award via video link with Hadlee was a meaningful one, with New Zealand’s greatest Cricket player talking about following Taylor’s career since it began back in 2006. Hadlee stated that Taylor’s progress since then has been extraordinary and he congratulated Taylor on a job well done.