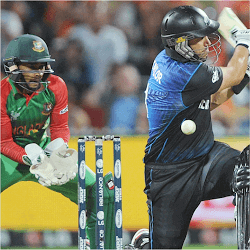 Bangladesh made a strong initial showing against New Zealand in their second ODI match. They were chasing New Zealand’s 252.

This by no means was an unattainable goal and at 105 for one, it seemed that victory might just be in the visiting team’s grasp.

Unfortunately Bangladesh could not keep up the strong start and soon lost their remaining 9 wickets with only 79 runs to show for it.

They had 163 balls to make 146 and fans and management alike must certainly disappointed in the outcome of the match, especially after their loss to New Zealand in their first ODI matchup earlier the week.

Kane at His Prime

Kane Williamson made another great showing by taking 3 wickets for 22. Another standout performance from New Zealand came from Neil Broom. Broom made his first 100 in ODI cricket in 8 years.

He had the home crowd roaring as they celebrated with him. He impressed with 109 runs off 107 balls. He made 8 fours and 3 sixes.

The rest of the batting line up did not really push the attack, possibly due to the slower pitch of the Saxton Oval where the match took place affecting the overall performance.

Taskin Ahmed and Mashrafe took the first wickets of the game with wicketkeeper Nurul Hasan making his first ODI dismissal. He caught James Neesham for 51 runs.

There was also some controversy in the match when Bangladesh’s Tanbir Hayder received a reprimand for conduct breach.

His reprimand followed using obscene language or gestures on the pitch after the 19th over. The incident came with 6 balls to go.

Hayder was pitching to Broom who pushed through to the mid wicket boundary and hitting his ODI century. Hayder admitted his wrongdoing and accepted the sanction that was handed down by the ICC. Hayder has shown lacklustre performance in the ODI’s so far. He has yet to take a single wicket after 8 overs of play. He has only added two runs to the teams score and it is understandable that the pressure has been mounting on the team.

Bangladesh could not keep their batting performance consistent in the game’s second half and they eventually folded under the New Zealand bowler’s assault.

Despite the Bangladeshi bowler’s focus on the middle and leg area to keep the batsman on their toes, New Zealand remained focused and sailed to another win.