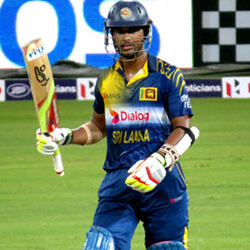 Sri Lanka has demolished England in the final part of this year’s five-match ODI between the teams, ending the series in a twist that many didn’t see coming. Niroshan Dickwella and skipper Dinesh Chandimal earned a huge 219-run victory via DLS method over the English team, which put on a poor performance throughout.

Dickwell claimed 95 and Chandimal 80, giving Sri Lanka their highest ODI total in history against England, with the Britons claiming 132-9 by the time the heavy rains had stopped in the 27th over. Despite the record-breaking win, England will still be walking away victories from the series with a 3-1 lead over Sri Lanka, with one game being drowned out due to the monsoon weather.

Eoin Morgan, captain of the English side, who has received the man-of-the-series award for his accumulated 195 runs in just four games, took a break during the final match. Opening bowlers Chris Woaks and Olly Stones had also taken the day off, and Jonny Bairstow has yet to return to the pitch following a football injury.

Morgan told reporters that Sri Lanka took advantage of England’s severely weakened team, and that he was disappointed that it had ended like this. Despite this, he did admit that it was good experience for the younger players, and that it allowed them to further their techniques before the start of the World Cup.

The two sides will be playing against each other next in the Twenty20 International, before a three-test series.