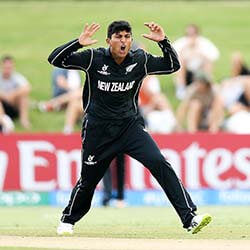 One of New Zealand’s most promising young cricket players currently faces being sidelined until next season. Not only will Wellington Firebirds all-rounder Rachin Ravindra most likely miss out on an entire season, but he’ll also be sitting out of a potential tour of England.

The young gun injured his right shoulder to the point of dislocation during a dive for the ball against Canterbury on Jan. 25. The injury that called early time on his Twenty20 Super Smash campaign is now threatening his time on the field for months on end. The dislocated shoulder is in need of an operation, but this diagnosis is apparently subject to a further assessment by a surgeon. Making matters worse is that Ravindra’s right shoulder is the same shoulder that underwent intrusive nuts-and-bolts surgery when the 21-year-old star suffered a similar injury while at school.

Depending on how extensive the surgery turns out to be, said coach Glenn Pocknall, Ravindra could be away from the field for anything between six weeks and nine whole months.

The disappointment has been significant for the young star, added Pocknall, especially given the central role the upcoming all-rounder has been playing for the Firebirds this season so far. Not being able to compete so early in one’s sporting career can be mentally taxing on a young cricketer, said the Firebirds coach, which is why the team plans on supporting Ravindra as far as possible as he makes his way back to the field.

Ravindra is a former Under-19 national cricketer, and caught New Zealand selectors’ eyes for NZ A against West Indies A in December.