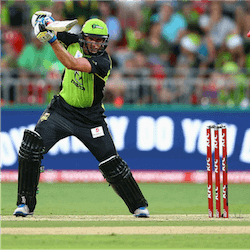 The first game of BBL07 was always going to be a thriller, but no one predicted just how tight it was going to be. The Sydney Sixers and the Sydney Thunder kicked off the season in style with game that went down to the final ball. Shane Watson looked all set to guide the Thunder to a massive five wicket victory to kickstart their campaign. That was until BBL debutant Daniel Sams was brought back into the attack.

Arjun Nair knocked out the winning runs for the Thunder, prompting the 21 odd thousand fans in the stadium to rise to their feet and cheer in unison. Just half an hour earlier, it was Watson who they were cheering for as he laid waste to the Sixers bowling. It was all looking over for the Sixers but somehow, they looked ready to defend to the last ball.

It was then that little-known Daniel Sams brought back into the attack to see if he could derail the Thunder’s plans. Born in Sydney, 25-year-olds Sams recently got a start in first class cricket playing for Canterbury, only to be dumped when Stokes made his arrival. For Sams, it was a testament to his talent as he took two vital scalps at the start of the match and then another two when he was reintroduced, including the all-important wicket of Watson.

Watson seemed unstoppable. He blasted 77 runs off just 46 balls before he was finally caught by Moises Henriques off of Sams bowling. At that stage, the Thunder still needed 24 runs from just 13 balls. Sams gave the Sixers a real shot as the Thunder were put under pressure needing 15 runs from the last over. All credit to 19-year-old Arjun Nair who managed to squeeze out the boundaries needed to guide the thunder to a much-needed win.

Even if the Thunder had managed to win, Watson would still have been the star of the show. Having brought up his 50 from just 36 balls, he again showed cricket fans why he has a place in the side despite being off contract. Having passed up the Bangladesh Premier League due to a hamstring strain, Watson impressed in grade cricket where he thumped 114 runs in a recent T20.

As for the Sixers, this was their fourth loss to the Thunder in the past five encounters. They will need to gather themselves if they want to gain any sort of momentum for the season ahead. The Thunder meanwhile, will be brimming with confidence for their upcoming clash with the Strikers.