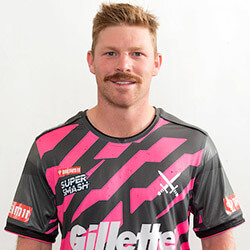 An emotional Tim Seifert recently opened up for the very first time about his ordeal with returning a positive test result while playing for the Kolkata Knight Riders in the IPL in India.

Seifert spoke to the media via a Zoom call on Tuesday, revealing some of what he had experienced following the postponement of the IPL.

The Black Caps wicketkeeper had been packed and ready to return home together with his fellow New Zealand players when he returned a positive test result from a pre-flight test taken on May 7. He said the result took him completely by surprise, as he had put down his “tiny cough” to nothing more than a mild bout of asthma.

Seifert said he had the distinct sensation of the world stopping just a little bit upon receiving the news from the team manager of the Chennai Super Kings. He said he could not help but fear that all the bad things he’d been hearing about were about to happen to him too.

But Siefert said the reality really set in when he was the only overseas IPL player left behind in India. He could only bid his fellow New Zealanders goodbye from the window of his hotel room, not knowing if or when he’d be able to see them again.

Fortunately for the 26-year-old New Zealander, he never developed more than mild symptoms, and said he felt thankful for still having had the energy to get up and out of bed, when so many others didn’t.