Trent Boult ruled out of second test against Proteas 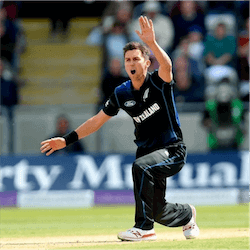 New Zealand’s star bowler Trent Boult has officially been ruled out of the second test against South Africa. The left arm swing bowler suffered an injury to his upper left leg and was unable to take part in the pre-match training session. Boult is expected to head back to Tauranga for a bit of R&R where he can hopefully recuperate before the third and final test.

As yet, no decision has been made on who will come into to replace Boult. At this point is seems Tim Southee is looking like the strongest candidate after being dropped for the first test in favour of specialist spinners against the ruthless South African batsman. Seamer Matt Henry is also looking like a strong candidate to come in. Along with Neil Wagner and Tim Southee, the three can form a solid triple threat.

It is looking increasingly unlikely that two spinners will be needed at the Bain, which means that either Jeetan Patel or Mitchell Santner will be sitting this one out. Patel has never had the opportunity to play a test on his home ground but after being seen at the training session, things might be different this time around. In the batting line-up, Neil Broom will come in to replace Ross Taylor. This will be test debut at number 4 for the Black Caps.

Meanwhile, this is the second home test that Trent Boult has missed since the start of the season. After suffering a knee injury, he had to sit out the second test against Pakistan in Hamilton. Boult has some impressive figures behind his name. This would have been his 51st test in professional cricket. Ranked the 13th best bowler in test bowling, Boult has taking a total of 190 wickets at a rate of 28.7.

Fellow bowler Tim Southee knows exactly how it feels to miss out on a test. Speaking to the press he said that you go through a range of emotions but at the end of the day, you have to respect the decision made by the coaches. If Patel comes on as a specialist spinner, it would be his fourth test since being recalled after a significant three-year absence from the national team. Patel has taken 62 wickets in test cricket at a rate of 47.88.