Trent Boult sells for over a Million at IPL auction 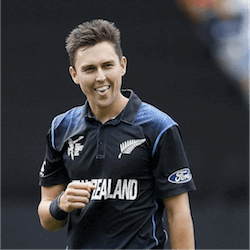 Trent Boult has officially become the second most expensive New Zealand player in history to be bought by an IPL team. The dynamic New Zealand fast bowler was snapped up for a cool $NZ1.04 by the Kolkata Knight Riders in the first day of the Indian Premier League auction. Starting with a base price of $312,000, Boult quickly rose up the ladder as the team’s continued to bid for his expertise.

When the Knight Riders eventually scooped him up for just over a million dollars, Boult instantly became the second highest selling New Zealand player behind former NZ captain Brendon McCullum. Boult has been in excellent form lately claiming career-best ODI figures of six wickets for 33 runs against Australia a few weeks ago. Boult is no stranger to the IPL having a stint with the Sunrisers Hyderabad team in previous years.

With the Kolkata Knight Riders, Boult will be joined by Indian spinner Sunil Narine as well as big hitter Chris Lynn and Bangladesh’s Shakib al Hasan to make up a pretty imposing team. Altogether, Boult was one of five New Zealand players to be picked up at this year’s IPL auction. The other big names to go under the hammer were Corey Anderson who will sign with the Delhi Daredevils after they handed over his base price of $208,000. Matt Henry, the New Zealand seam bowler became the third Kiwi to be picked up at the action. He was signed for his base price of $104,000 to the Kings XI Punjab.

Guptill Picked up on Second Pass

Other big names to go under the hammer was South African fast bowler Kagiso Rabada who joined the Delhi Daredevils for a cool $1.04 million. Meanwhile England’s Ben Stokes topped auction with the Rising Pune Supergiants forking out a staggering $3 million for the all rounder. Fast bowler Tymal Mills also pulled in an impressive $2.5 million selling to the Royal Challengers Bangalore.