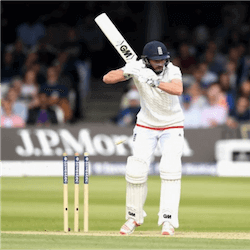 James Vince: Australia To Live Up To Hype

England batsman James Vince has said that Australia needs to put their money where their mouths are.  Referring to Australia’s confidence that the Ashes series was already in the bag, Vince responded by saying that Australia had better back up their chat, failing which the home crowd would be wondering why Australia wasn’t doing what they said they would be doing.

This all in response to Australia coach Darren Lehmann saying that he liked what he saw in the English side and Josh Hazlewood’s claims that Australia would be opening some English scars.

The first Test commences on Thursday at the Gabba.  Australia had not lost a single Test at the Gabba since 1988.   According to Vince, this was the main reason why he believed that the Aussies had to back up their idle chatter, as they certainly did not want to end up being the first squad to break the Gabba record.

England’s Dawid Malan, set to play his very first Ashes Test, admitted that the Gabba looked intimidating, even daunting.  The 30 year old said that he had never played in front of 40,000 people before and that it was bound to be able to “get to you”.

The fortress that is the Gabba may very well come under fire this year, with selection and other issues aplenty.  The worrying trilogy being David Warner, Steve Smith and Peter Handscomb.  Warner has made but one good score in the Sheffield season, Smith has been anything but reliable and highly inconsistent performance-wise and Peter Handscomb has managed but a half-century.

The selection process has come under heavy fire, with many saying that the only decent selection had been Cameron Bancroft, who had hit two half-centuries and a double ton in the Sheffield Shield matches.

That having been said, something as simple as the weather could end up toppling the Australian apple cart altogether.  Extra morning moisture on the Gabba could very well make James Anderson and Stuart Broad completely unplayable.  The only solace in the already dire situation seems to be that England aren’t exactly what you would refer to as in top form either.

England are headed in the Gabba’s direction on a wagon drawn by inexperience in the way of Dawid Malan, Gary Ballance, Ben Foakes, Mason Crane, James Vince and Craig Overton.  The suspension of Stokes has only served to add more insult to injury.

Stokes is currently awaiting the outcome of assault charges, which will affect whether he will be joining the series later on.