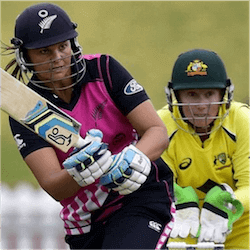 An impressive knock from Amy Satterthwaite has put the While Ferns in a commanding position to break the 18-year-old One Day International series drought against Australia. Satterthwaite drew on all the strength she had to post an unbeaten 102 runs at Eden Park. Her skills with the bat helped guide the Ferns to an impressive 5-wicket win in the first of the ODI matches in the three-match Rosebowl Series.

Coming off the back of a triumphant Twenty20 series win against the Australians, The White Ferns will want to continue their good form to claim the Rosebowl series which they have not won since 1999. After suffering a total of 14 defeats and one draw, it looks as if the girls are poised to make history with two games left to play.

At Eden Park, Australia won the toss and decided to bat first on the very compact oval. Guided by a world-class century from Beth Mooney, Australia posted an impressive total of 275 runs in their allotted 50 overs. Mooney was supported by Rachel Haynes who struck a quick 50 off 61 balls and a maiden 50 from Elyse Villani in just 43 balls. Early on in the innings Hanes was dismissed by had to be recalled due to a no-ball ruling from the umpire.

At 237/3 it looked as if Australia were heading to a score of 300 plus. However, some skilled bowling by Lea Tahuhu and Holly Huddleston restricted the visitors to a chase-worthy score of 275 runs all out with one over to spare. Going into bat, New Zealand might have looked a bit nervous. At it stood, the Ferns had never chased down more than 267 runs in any ODI match before.

Despite the odds and historical evidence, Ferns captain Suzie Bates got the girls off to a flying start. Knocking up a quick 55 runs, Bates gave New Zealand the bump they needed to get the run-rate in the green. At the start of her innings, Satterthwaite struggled to keep the run rate below six an over but was kept going with sensational knocks by Katey Martin and Katie Perkins. The two Katies helped Satterthwaite find her stride and increase her strike rate.

Needing 60 runs from 60 balls suddenly, the girls got stuck in and kept the runs ticking over. The numbers moved down needing 29 runs from 30 balls then 13 runs from 13 balls. It was at this point that Satterthwaite started to cramp up but managed to continue her impressive strokeplay. Consecutive boundaries brought Satterthwaite her century and took New Zealand over the line. The Ferns will now have a chance to claim the series in their second game in Mount Maunganui on Thursday.