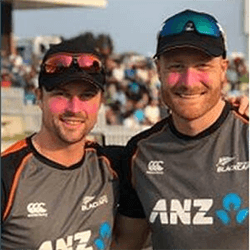 The Indian team annihilated New Zealand with yet another win when the two teams locked horns at the Bay Oval Cricket Ground in the Bay of Plenty area on the 2nd of February 2020. The Kiwis did not manage to keep their composure despite being in a position of command at one point, but why did the team have their faces painted pink?

Rohit Sharma went hard against the hosts but was retired hurt, restricting India to 163/3 in their 20 overs. With just 57 runs needed off their last 54 deliveries, it seemed that the Black Caps would have their way after all. But they choked, giving India a victory of 7 runs and wrapping up the 5-match Series with a final score of 4-0. Apart from this collapse, the Black Caps’ pink faces are what made the headlines.

Australia and New Zealand Banking Group Limited, the official sponsors of New Zealand Cricket, asked fans to collect the free zinc at their branches or via the Supporter filter on Facebook. This was the first step in the promotion of the White Ferns’ World Cup T20 campaign.

In contrast to their male counterparts, the White Ferns claimed a nine-wicket win over South Africa in their first Bay Oval T20 match. Sophie Devine, the captain, scored an unbeaten 54 in just 32 balls, including three fours and four sixes as her teammates comfortably achieved their target of 117 in the 13th over. Rachel Priest, wicketkeeper, also did excellently, scoring 37 off 28 balls when she was at-bat.