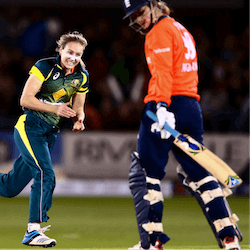 Punters and cricket fans don’t have long to wait until the Woman’s Cricket World Cup officially gets underway on the 24th of June. Running until the 23rd of July, the 2017 Woman’s Cricket World Cup will showcase the best ODI teams from around the world and provide plenty of betting action. This year, England will play host to the eight competing nations with the final being played on the hallowed grounds of Lord’s. England has hosted the World Cup on two previous occasions, winning it both times in 1973 and 1993.

Ten teams entered the tournament hoping to book their spot in the World Cup. Of the ten, Pakistan, South Africa, India and Sri Lanka topped the log, making up the other half of the eight competing for the World Cup title. Teams that missed out this year included Bangladesh, Ireland and Scotland.

In preparation for the World Cup, the ICC has announced the official warm up schedule for the eight competing nations. The Warm-up matches will kick off on the 19th of June and run to the 22nd, giving the teams a chance to adapt to the English conditions. New Zealand will get thing started on the 19th facing off against India in Derby while the hosts take on Sri Lanka in Chesterfield.

The following day, 2013 Cup winners Australia will take South Africa in Ockham while the West Indies take on Pakistan on the same day.  On the 21st of June, England will face off against New Zealand while India play Sri Lanka in Chesterfield.

The Australian team, who are looking for their seventh World Cup victory will play Pakistan in Leicestershire while the West Indies will go up against South Africa in Oakham. The two-pronged warm up games will give the teams the best possible chance to adapt to the field conditions and hone their preparations for the main event.