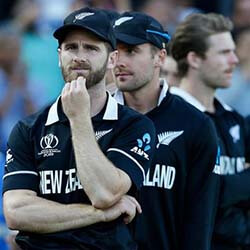 Black Caps players competing in this year’s Indian Premier League in India have expressed grave concern over a government ban on flights incoming into the country from India. This as the global health crisis appears to be worsening in the IPL host-country.

A total of 10 Black Caps players as well as seven New Zealand coaches are involved in this year’s IPL – which competition will be played across 56 matches spanning six cities across six weeks. The finals series bats off in Ahmedabad from May 26-31.

Concerns recently escalated after a local India newspaper headlined a story with “Dark Covid cloud hangs over India”. The IPL will once again this year be played in closed and spectator-less stands as new daily local cases in India increase to more than 100,000.

Following the emergence of 17 new positive cases in managed isolation, NZ Prime Minister Jacinda Ardern on Thursday announced the ban from all flights incoming from India between April 11 and 28. The announcement has created even more worry among players currently isolating in a bio-bubble as they prepare to compete in this year’s competition.

According to NZ Cricket Players’ Association CEO Heath Mills, players are mainly concerned about when they will be permitted to return back home given the latest ban.