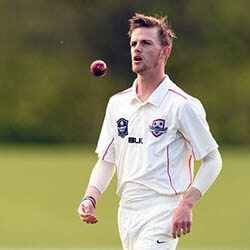 26-year-old Canterbury bowler Andrew Hazeldine will not be participating in the remainder of the cricketing season following a Hodgkin’s Lymphoma diagnosis received in September. Hodgkin’s Lymphoma is a type of caner affecting mainly the body’s immune system, and if not detected early, can be fatal.

Hazeldine’s case was thankfully detected very early and he is now undergoing the prescribed treatment, Canterbury Cricket has confirmed. Owing to the early diagnosis, Hazeldine is reportedly already focusing on a 2021 professional return. Even so, said Canterbury Cricket High-Performance Manager Marty Croy via an official team statement recently issued, the situation remains upsetting and worrying to the young player and his family. Cory also said that the team’s thoughts were with Hazeldine and his family during this particularly difficult time.

The young Hazeldine played his debut match for Canterbury in 2018 – and has since taken an impressive 35 wickets in a total of 15 red-ball matches played for the side. Hazeldine is originally from Portsmouth in the U.K., and put in his last appearance for Canterbury in March, during which time the team competed against Otago in a Plunket Shield match.

Jackson Latham, who has in the meantime been selected to replace Hazeldine, has expressed gratitude at having been granted the opportunity to play professional cricket. He added that he considered the circumstances around his selection to have been unfortunate given Hazeldine’s situation.

Canterbury are the current Plunket Shield points leaders. England’s domestic season officially moves into OD-mode at the end of the month.