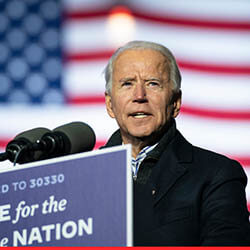 Bookmakers have posted record-smashing volumes of wagers placed by bettors on the recently finalised 2020 U.S. Presidential election. So much so, that this year’s election has emerged the biggest political betting event in the history of the U.S. elections.

Since betting on political outcomes is illegal across the United States, the focus was this year once again on betting enthusiasts situated in the U.K. as well as in several other parts of regulated Europe.

Betfair furthermore confirmed having taken a giant-sized £1 million (US$1.32 million) bet on Biden being voted the new president. The lucky punter gets to bank an incredible £1.54 million (US$2 million) in betting returns following their successful prediction of the outcome.

The majority of bookies across regulated Europe as well as the U.K. wasted no time moving their money-lines in favour of a Joe Biden-win.

Betfair, for one, emerged spot-on in its prediction of 290 electoral points in favour of Joe Biden – a prediction that ultimately proved only 6 points more than the actual outcome of 284.