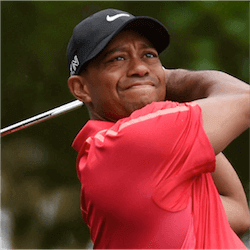 Golfing great Tiger Woods has been inducted into the sport’s Hall of Fame. Woods cut an emotional picture as he accepted the accolade in the presence of his family and friends on Wednesday.

One of those present had been Woods’ daughter, Sam, who wore red for the occasion in honour of her father. Speaking about difficult times faced alongside her dad, the 14-year-old referred to her father’s accident in February last year, saying the family did not know what to expect and whether or not Woods would be coming home with both legs intact.

She said it was a proud moment that Woods was accepting the award while standing on both his feet.

Tiger Woods has come a long way since first waddling onto the stage of The Mike Douglas Show as a 2-year-old some 44 years ago and hitting a couple of putts for hosts Jimmy Stewart and Bob Hope.

During her acceptance speech, Berning, now 80, paid tribute to Woods and said she had won all her awards before he was born. This drew a massive smile from the golfing champion.