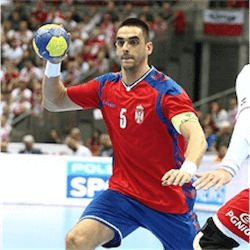 While it may be considered a niche sport in many countries, handball is slowly becoming a popular sport with the online betting community. With tournaments taking place throughout the year, the betting opportunities are extensive with everything from match bets to props and futures. As a sport, handball is fairly similar to indoor football, with the obvious exception that players use their hands to pass the ball. Two teams of seven players go head to head where the aim is to toss the ball into the opponent’s goals that are manned by a goalkeeper.

A standard handball match consists of two periods of 30 minutes each on a court that measures 20 meters by 40 meters. Goals must be scored by throwing the ball from outside the 6-meter goal zone or by diving in. The team with the highest number of goals at the end of the match wins. In the world of handball, there are a number of international tournaments that propel the sport into centre of the online betting action; these include the Summer Olympics, the World Champs and the European Champs.

In 2017, France broke all handball records by becoming the first country to simultaneously hold the world title in both the men and women’s event. The 2017 World Champs is now a distant memory as teams gear up for the 2018 Men’s EURO Handball Championships to be held from the 12th to the 28th of January.  This year, Croatia will be hosting the event at venues, which include Split, Zagreb, Poreč and Varaždin.

What to Expect at the Champs

The hosts will be looking to improve on the bronze medal finish in the 2016 Euro Champs, which was held in Poland. While they hold two Olympic gold medals, Croatia has never won Euro title losing to France and Denmark in two successive finals. At the World Champs last year, Croatia had to settle for a disappointing fourth, losing to Slovenia in the playoff. France went on to win and is currently the favourites to take the Euro title. The final will take place on the 28th of January at the Zagreb Arena in Croatia. As it stands, the betting odds look as such:

2018 EHF European Men’s Handball Championship Starts Chastened only slightly by the realisation that their tournament logo looks remarkably like a plump, middle-aged matron attempting rhythmic gymnastics, organisers got the ….