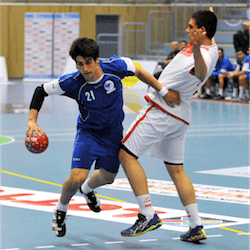 Chastened only slightly by the realisation that their tournament logo looks remarkably like a plump, middle-aged matron attempting rhythmic gymnastics, organisers got the 2018 EHF European Men’s Handball Championship underway in Croatia on January 12.

This may surprise any Kiwi punters who assumed handball was a football offence, which of course it is. It’s also a recognised team sport.

Played with a ball the size of a large grapefruit, it has similar dribbling and travelling rules to basketball or netball, but players need to throw the ball past a goalkeeper into a scaled-down football goal, rather than a basket, to score.

2018 marks the second time that Croatia has hosted the biennial tournament, which has been running since 1994. The Balkan republic on the Adriatic Sea also played host in 2000.

This year, the action will be divvied up between the Zatika Sport Centre in Porec, the Varazdin Arena in Varazdin, the Spaladium Arena in coastal tourist mecca Split, and the Arena Zagreb in the eponymous capital.

As can be imagined, handball is a minority sport all over the world, but it does have quite a following across Europe, particularly in the northern regions. It’s almost always played indoors, which makes it attractive in places with long, icy winters.

The most successful team to date in the EHF European Men’s Handball Championship has been Sweden, winning the inaugural 1994 tournament in Portugal and then taking the title three times in a row from 1998 to 2002.

France has won the tournament three times: in 2006, 2010 and 2014. Denmark and Germany have two titles each, with Russia accounting for the remaining championship, which they won in 1996.

Spain Ever the Bridesmaid

Spain hold the record of finishing as runner-up four times, coming second to Russia in 1996 and Sweden in 1998, and losing the final to France in 2006 and Germany in 2016. They have never won the tournament, however, and since they’re the top seed in Group D with Denmark, Hungary and Czech Republic, Spanish fans are hoping this will be their year.

Reigning champs Germany are the threat in Group C, alongside Macedonia, Slovenia and Montenegro, while France tops a Group B that includes Belarus, Austria and Norway. Hosts Croatia look like the strongest side in Group A, which they share with Sweden, Serbia and Iceland.

The 2018 Men’s Euro Handball Championships While it may be considered a niche sport in many countries, handball is slowly becoming a popular sport with the online betting community. With ….