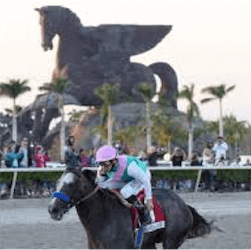 Gearing Up for the 2018 Pegasus World Cup

In the world of horse racing, the purse often determines the quality of the runners and the success of the event. Before 2017, the Dubai World Cup was known to have the highest purse and so attracted a throng of elite runners from around the world. Then came the inaugural running of the Pegasus World Cup. First run on the 28th of January 2017 at Gulfstream Park in Florida, the Pegasus World Cup is an American Thoroughbred horse race open to all horses four years old and up. The race is run on dirt over a distance of nine furlongs, which translates to 1 1/8 miles.

When it was first run in 2017, the Pegasus World Cup offered a purse of $12 million, making it officially the richest race in the world, surpassing the Dubai World cup. In this race, all the entrants carry 56kg with a 3-pound allowance for fillies and mares. Named after the mythical horse whose statue stands in Gulfstream Park, the Pegasus World Cup is the brainchild of Frank Stronach who proposed the idea an owner’s conference in 2016.

The Richest Race in the World

The idea to run the race in late January was simply because the date would not interfere with the preparation and running of the Breeders Cup as well as the Dubai World Cup. It also allowed trainers to get in one more race before the North American breeding season kicks off in Feb. The format for the Pegasus World Cup is slightly different to most races. In this case, 12 shareholders pay in $1 million for a position in the game and an unspecified horse. The shareholder or shareholders then have the ability to lease, contract or race a starter or sell their shares in the game. If the horse wins or places, shareholders have an equal share in the net income of the race.

The 2017 Pegasus World Cup officially carried a Grad 1 status with 12 entrants vying for the ultimate prize. What the race boiled down to, was a final match-up between the two-time American horse of the year, California Chrome and the IFHA World’s Best Racehorse of 2016 in the form of Arrogate. In the end Arrogate swept to victory, drawing a lead of five lengths over Shaman Ghost.

This year, there are 11 confirmed entries for the 2018 Pegasus World Cup. After winning the 2017 Breeders Cup Classic, Gun Runner is the firm favourite for the race, even though it was announced that the horse would officially retire after the Pegasus. Collected who won the Pacific Classic has the second best odd while West Coast who won the Travers is also in the running.