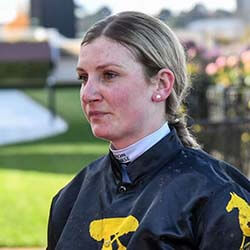 What started out as fun and games at a house party at a local Airbnb on Wednesday evening has now led to a suspension of champion jockey Jamie Kah and fellow-rider Ben Melham for the entire Melbourne Spring Racing Carnival. The pair was suspended by horse racing authorities after it emerged that they had not followed health and safety protocols.

Kah issued an apology on Twitter on Friday morning, explaining to fans that she’s embarrassed by her non-compliance with protocol – not to mention disappointed with her own actions.

While Racing Victoria has in the meantime confirmed the suspension, as well as that each of the four wrongdoers have been fined over $5k by local law enforcement authorities, Victoria police issued a statement on Friday morning detailing how six people have been fined $5,452 each for breaking with local health and safety protocols in the region.

According to Racing Victoria chief steward Robert Cram, the harsh nature of the penalty imposed on the foursome intends to drive home the seriousness of the offense – and hopefully act as a deterrent to others.

The suspension came into force at midnight on Aug. 26 and will reportedly last through midnight on November 25.