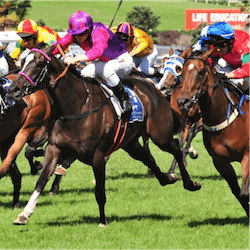 There are three horses currently looking good for the Group 1 New Zealand Derby, the feature race that kicks off Auckland Cup Week on Vodafone New Zealand Derby Day, March 04. The Auckland Cup itself will be run a week later, on March 11, but the opening meeting is traditionally a heady mixture of fashion, glamour, entertainment and race betting.

The 2,400m Derby is open to 3-year-olds carrying set weights, and its purse of $1-million makes it the richest race in New Zealand, alongside the Karaka Million.  It is too early to have a definite field, but it would be helpful for punters to assess the form of these three horses closely over the next five weeks.

Gelding Sacred Elixir is the current favourite, at $3.50. Trainer Tony Pike also trains 2016 Derby winner Rangipo. Sacred Elixir will compete in the 1,600m Karaka Mile at Ellerslie on January 29, and on February 11 in either the Herbie Dyke Stakes at Te Rapa, or Ellerslie’s Avondale Guineas.

Savile Row for Stakes or Guineas Too

Colt Savile Row is the second favourite for the Derby at $7.00. Trainer Mike Moroney was impressed with his performance against other horses his age in the 1,600m Randwick Meats Levin Classic at Trentham a few weeks ago, when he ran second by a nose to Hall Of Fame.

The trainer now plans a weight-for-age race to toughen the 3-year-old up against older runners before the Derby, and again, the choice is between the 2,000m Herbie Dyke Stakes and the 2,100m Avondale Guineas. So betting enthusiasts may get to see how he fares against Sacred Elixir even before the Derby.

Hall Of Fame for Waikato Guineas

With his Group 1 victory at the 2017 Levin Classic, Hall Of Fame has impressed bookmakers enough to be offered at $8.00 for the Derby. Trainers Stephen Autridge and Jamie Richards plan to try him over 2,000m at Te Rapa on February 04, in the Group 2 Waikato Guineas. The colt has won five of his nine starts to date, so this could be his year at the Derby.

We will keep betting fans posted on the Derby field developments as race day approaches, but one thing seems certain already: we are in for some explosive racing to launch Auckland Cup Week 2017.