Here’s To The One Who Missed Out 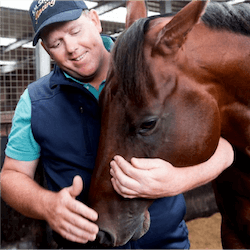 Newcastle trainer Ben Smith had had high hopes ahead of The Everest but they were all smashed to bits when it became apparent that his pride and joy, In Her Time, would not be racing in the richest race on turf, this year after all. It was simply a matter of there only being so many race slots and that these were all full-up.

Smith admitted earlier this year that there was a time when he would never have dreamed of having a horse compete in a race such as The Everest, and more than that, he would have thought it to be bordering on the impossible to own a horse like In her Time.

Jockey Corey Brown agrees, saying that he could not believe how well the mare had trialled at Rosehill.  Brown wasn’t supposed to ride In Her Time at Rosehill but it so happened that her scheduled rider had turned up late for the event and Brown was afforded the happy opportunity.

Not Always An Easy Road

It hasn’t always been smooth sailing for Ben Smith.  In fact, no more than six years ago Smith had had to endure an entire winter without hot water in his home in his bid to make it as a professional trainer.  To add insult to injury, it wasn’t very long after the cold stint that doctors discovered that Smith had in actual fact contracted pneumonia.

The 35 year old recalls nearly having been hospitalised as a result of having had no money to pay his electricity bills.  He reports having had to sink any spare money at his disposal into his training career and that hot water remained on firm second place as far as priorities went.

During that same year Smith also underwent skin surgery for the removal of a cancerous growth from his lip.  Smith remembers that it was a trying time for his family too, and that any notion of packing it in, from his side, would have been met with only loyal support.  He recalls that it was a difficult situation as his family had no desire to see him struggle in the ways that he did and as such advised that it would be best if he had gone back to work for someone else.

This was never an option for Smith, who knew what he wanted to do.  It’s now a little more than five years later, and Smith is finally reaping the rewards as a result of his commitment to a passion.  A setback such as In Her Time missing out on The Everest will be the last thing to bring a great man down.