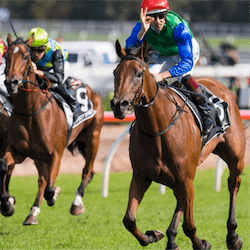 Jockey Hugh Bowman celebrated in style after he claimed his 4th Australian Oaks win riding New Zealand trained Bonneval. Coming in from behind, Bonneval enjoyed a comprehensive victory, in her first run in Australia. Bowman had a string of successes at the ATC Oaks, picking up a win with Daffodil in 2009, Streama in 2012 and Sofia Rosa in 2016. The famous jockey went back-to-back on the second day of the Championships. He became the first rider to win successive Australian Oaks races since 1999.

Bonneval became the second Zealand trained filly in successive years to beat home the locals in this Australian Classic. She shares the honour Sofia Rosa and has given her trainers a brilliant Australian Derby/Oaks double success after her stablemate Jon Snow picked up a win in the Australian Derby one week earlier. This was also the first time a trainer won the double since Clarry Conners did it in 1989.

Bowman managed to time his ride to perfection. He kept his nerves and remained calm even though he was well back until the final straight. Former Crown Oaks winner Lasqueti Spirit was beaten for pace early on and couldn’t keep up with the pace set by Lubiton. Eventually Lasqueti Spirit managed to rush down the outside of the field and move to the front. Lubiton held on for second place ahead of Nurse Kitchen, the Vinery Stud Stakes runner up. Perfect Rhyme held the third spot in a race that turned out to be a staying contest.

Bowman Timed his Race to Perfection

Meanwhile Bonneval was holding back at fourth last as the fillies began to stretch out with Lasqueti Spirit leading the charge home. Speaking about his success, Bowman said that he decided to be patient and bide his time, he knew the filly would not let him down. With Lasqueti Spirit four lengths clear of the pack, Bowman slowly made his way to the front. Coming into the home straight, Perfect Rhyme made a charge on Lasqueti Spirit while Bonneval continued at pace down the outside.

Bonneval eventually hit the lead with 100 meters to go and held on for the win. Perfect Rhyme followed hot on her heels for second with the tiring Lasqueti Spirit rounding out the Australian Oaks trifecta. Bonneval is now set to return to New Zealand before possibly making an appearance at the Melbourne spring Racing Carnival later this year.

Australian Oaks Day may be over but there’s still plenty of betting action for avid horse racing fans. Sportsbet’s Thursday Racing Offer for the Pakenham Races 1-4 rewards you with an extra Power Play token if your horse runs 2nd or 3rd.