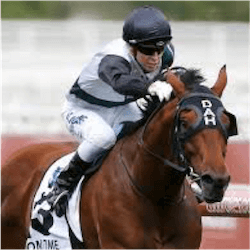 Former top galloper, Boom Time has produced a stunning upset at the $3 million Group One Caulfield Cup. Trained by David & Ben Hayes, $51 priced Boom Time, outpaced both Single Gaze and race favourite Johannes Vermeer. This was the David Hayes’s third Caulfield Cup after winning with Fraar in 1993 and Tawqeet in 2006.

Sir Isaac Newton was the early leader in the race, setting a strong pace and creating a massive 10-length lead at the 1000m mark. Amelie’s Star and Single Gaze looked strong behind the leader, with plenty of gas left in the tank. Heading down the straight, the field caught up with Sir Isaac Newton while Single Gaze edged out in front with Humidor hot on her heels. Boom Time was packed in with a series of horses all trying to make up ground.

Race favourite, Johannes Vermeer got boxed in, ultimately resulting in a third place. At the 100m mark, Boom Time swung back to the inside and edged out Single Gaze to take the late win. For jockey Cory Parish, it was a sensational ride. Finding out that he was only going to ride Boom Time earlier in the week, Parish was over the moon with the win and happy that David Hayes had the faith to put him in the race.

A Disappointing Run for Bonneval

For most of the day, the track favoured front runners, however many leaders had left themselves too much to do. Bonneval was in a with a shot having recovered from leg injuries, the took her place in the field with Kerrin McEvoy in the saddle. McEvoy was looking to complete an incredible week of racing after riding Redzel victory at The Everest and then going on to win the Cranbourne Cup on Folkswood. He then added a third win at the Blue Sapphire Stakes on Wednesday just to add icing to the cake.

A fourth win was not on the cards though as Bonneval got stuck at the back of the field and never really looked in contention for the race. Other race favourites like Amelie’s Star and Harlem also faded towards the end. Marmelo, the winner of this year’s 3000m Prix Kergorlay, had a good run, coming home in sixth, also proving an excellent trail run for the upcoming Melbourne Cup.