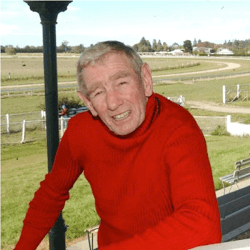 Whenever you heard the word “Blummy” being bantered about you could be sure that Bill Skelton was in attendance. This friendly gentleman snubbed swearing, substituting “blummy” for the various swearwords that have become part and parcel of the racing world of modern times. He was the only person to make use of this word, and he and it have passed away, with Skelton seeing 85 years before being called home yesterday.

“Bustling” Bill Skelton was an astonishing jockey, and his nickname became as widely known as the one he was christened with at birth. This nickname arose as a result of his riding-style, which consisted of getting the horses out of the barriers, and, in popular racing parlance, “sending them”.

Bill Skelton triumphed in many races from the front, but did not lead these with recklessness, employing excellent judgement instead. The fact of the matter is that it is not possible to set a record amount of career wins that last over 25 years by being lucky –fine riding is required, and Bill Skelton saw that this was delivered.

Skelton retired in 1977, with 2179 wins behind his name, 2156 of which stood in New Zealand. This record remained in place until it was surpassed by Lance O’Sullivan in 2002, but it must be remembered how there were many fewer races being run when Skelton was active.

Bill, along with his equally well-known brother Bob Skelton, was brought up in a family that went on to produce five jockeys from their Greymouth base. Bob passed away from an illness related to cancer in Victoria in August, and is best remembered for his loop in the reigns; long stirrups; and uncommon ability to judge pace in staying races. An immaculate sense of balance was exhibited by both brothers, along with a respect of the animals they rode and the races they participated in.

Bill Skelton never faltered from his Belief that Daryl’s Joy, a horse trained by Syd Brown at Woodville, was the best horse he had the privilege to ride, with this animal becoming New Zealand’s Champion 2YO in 1968 and Australia’s Champion 3YO after he won both the Cox Plate and Victoria Derby in 1969. This colt was seen as invincible as a 3YO and had a three-quarter share subsequently sold to an American owner.