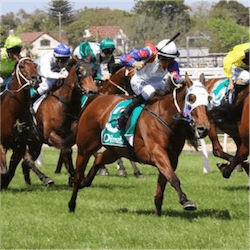 James Cumming’s Hartnell is a sure favourite in this Saturday’s PB Lawrence Stakes at Caulfield. Not only has Hartnell been consistent throughout its career, it seems to have improved this year with a series of great runs where Hartnell faced some of the best in the business.

He claimed a few 2nd place spots at the Ranvet Stakes, the Queen Elizabeth Stakes and the Apollo Stakes. With a legacy like that, there are not many horses that can challenge Hartnell’s performance.

Because of this, it seems Darren Weir’s strategy is to throw everything at the wall and see what sticks. Weir has nominated 6 of his stable to compete at the PB Lawrence Stakes. Included in his nominations is the dominating Black Heart Bart.

With first place finishes in the Memsie Stakes and the Underwood Stakes this year alone, Black Heart Bart is a serious threat to Hartnell. Cummings can only hope that Black Heart Bart has not yet returned to form after a 7th at the Goodwood and a 5th at the Darley Kingsford-Smith Stakes. The odds of that are not very high though as Bart has been resting and preparing since May.

Weir will also be bringing along Gailo Chop, Humidor, Amelie’s Star, Star Exhibit and Tosen Stardom. Gailo Chop is a proven French horse that should have no problems adapting to the climate to provide a competitive performance.

Humidor is also a proven horse that has had a notable autumn performance that should only improve as he gets more outings and continues to train with Weir and Co.

Below we have the nominated field, along with their trainers and current Hcp rating.