Chautauqua to confirm BC Stakes 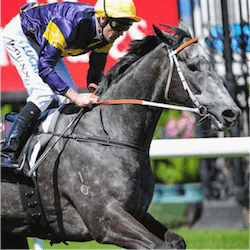 Each year the Flemington Racecourse in Melbourne hosts the Black Caviar Lightning Stakes sprint race. With a massive prize pool of seven and a half million Australian dollars and entries from all over the world, the Lightning Stakes is a great annual sprint racing event.

This year the race will be hosted on Saturday the 18th of February.

Chautauqua won the Lightning Stakes by half a head, just past Dwayne Dunn, finishing the 1000 meters in 57.02, finishing the final furlong with a huge burst of speed. With its 10-6-1 career, the 5 year old is set for a great performance despite a busy 2016

Co-trainer of Chautauqua, Michael Hawkins is in great spirits for the gelding’s 2017 performance. Chautauqua is currently in pre-training and Hawkes has stated that the horse looks set to be in great condition as he is looking like his old self after a tough schedule after last year’s Lightning Stakes.

The rest of the training team consists of Hawke’s brothers, John and Wayne. They trained Chautauqua mainly for R & C Racing and other partners including GPI.

Hawkes said that they know his Group 1 races put Chautauqua up against the best on offer and they entered a much-needed break after the main racing events they wished to take part in.

The team has not yet finalised when Chautauqua’s first appearance will be in the new year, they are only so far planning to enter the TJ Smith stakes with its $2.5 million purse.

The horse is currently in Sydney and he could very well appear next in Hong Kong again or at the Royal Ascot.

She is an Australian thoroughbred who is undefeated in 25 races and has won 15 Group 1 victories. She was retired on the 17 of April 2013.