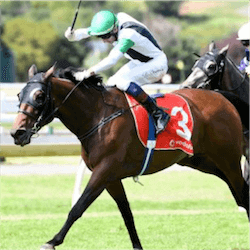 Thursday’s rescheduled Group 1 Auckland Cup delivered a spectacular event which saw race favourite Chenille coast to victory. As the mare crossed the line, Tony Pike could hardly control his emotions, thinking of his parents who were watching the race from a hospital in Hamilton.  Wayne, Tony’s father underwent surgery to remove a cancerous tumour on Monday and obviously could not attend the race.

Along with his wife Vicky and their two grandchildren Molly and Oliver, Wayne was able to watch as Chenille annihilated the competition in the 3200m event. Chenille, the daughter of Pentire has showed great ability from the get go. She picked up her first win in 2015 at Tauranga and has gone on to win nine races racking up stakes of around $550,000.

Cambridge trainer Tony Pike was happy to have a second go at the Auckland Cup. He was on the verge of scratching before the race was rescheduled and moved to Thursday evening.  Speaking to the press, Pike said that he was glad to have gotten a second chance at the track. Chenille was running well and improved in the midfield at around the 600m mark. Coming in widest into the straight she had the early lead on the run home.

Megablast and Jacksstar Well Behind Chenille

Chenille kept up a strong gallop to move past Jacksstar, El Pistola and Megablast to take the honours with Megablast coming in runner up. Pike says that he has entered Chenille into the Sydney cup but whether they head across the Tasman is still undecided at this point. With such a dominant performance at the Auckland Cup, the 3200m Sydney Cup would be well within her reach.

While Pike prepared Rock Diva to win the Cup in 2015, for Innes, it was his first win in the race so far. In order to make the carded weight of 53.5kg, Innes had to waste hard, keeping the mare in check for the 3200m race. Innes said that he had to waste hard all week and remain on rations for a further five days, but it seems to have panned out. Jacksstar who came in third, also had a magnificent run. Trainer Gary Vile said that he damaged a flexor tendon but he should be alright. The team bandaged him up and he will head home for a bit of R&R.