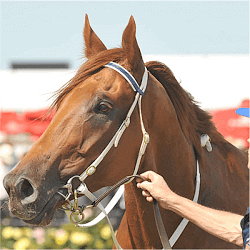 The Crown Perth-Winterbottom Stakes Day is a grade weight horse race held for thoroughbreds from the ages of three and up. The race is known to be one of the biggest held in Australia and has produced some superstar winners over its years. Thoroughbreds from all over the world fly to Perth to try their luck on the 1200 meter long turf track, all competing for a purse of one million Australian Dollars

The mighty Buffering has won the Crown Perth-Winterbottom Stakes Day twice so far; once in 2013 and then again last year in 2015. Buffering was one of the oldest horses to win the Crown Perth-Winterbottom Stakes Day in 2015 at the ripe old age of eight. Most of his seven year old season was spent in the paddock due to illness and injury, resulting in him not running the stakes in 2014.

Buffering was one of the main track rivals to the mighty mare Black Caviar. Although he never actually beat her, they ran together at many races all over the world. He is also the only Queensland bred horse to surpass seven million Australian dollars in prize money, and the only 7th Australian horse to do so to date.

Unfortunately a gelding, Buffering has been put out to pasture and still makes appearances at race courses as a living legend. The bay gelding is affectionately known as ‘The Buff’. He had 54 career starts with an incredibly impressive record of 20 wins, nine seconds and eight thirds. Backing Buffering throughout his career would have earned you a 54% return on your investment.

Ortensia won the – Crown Perth-Winterbottom stakes day twice, once in 2009 and again in 2011. She was known as a superstar in the sprinting world, having competed all over the world winning the Al Quoz Sprint at Meydan Racecourse in March 2012. She raced in America, England and of course Australia.

Bred in New South Wales by L. D. Rhodes, the bay mare retired after her 2012 season at the age of seven. She was put to stud and had two fillies during that time. The first is currently a yearling by Choisir and the second a weaning by Dream Ahead. During her tenth year, Ortensia developed a tumor on her lung. She was treated for it and seemed to be getting better, but in July 2016 she sadly had to be put down as her health and breathing had dramatically deteriorated. She was in foal to champion stallion Redoutes Choice.

Ortensia was sired by Testa Rossa, also an Australian horse. Testa Rossa was the great grandson of the mighty Danzig, who interestingly was Buffering’s great grandsire as well. Her dam, Aerates Pick, was a through and through Australian horse with a pedigree that included the likes of Snippets, Loosen Up, Never Bend and way further back Nasrullah who was the brother of Nearctic.