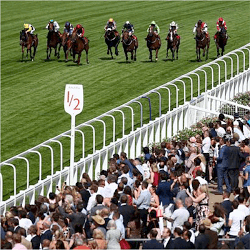 Gearing Up for The Crown Perth Winterbottom Stakes

It’s week 2 of the TABtouch Masters and the good times look set to keep on coming with the running of the $1,000,000 Crown Perth Winterbottom Stakes. Avid Kiwi horse racing fans are gearing up for this weekends’ race and are keeping a close eye on the odds and markets. Taking place on Saturday the 26th of November, this event is always a highlight on the year’s calendar and promises plenty of punting opportunities for anyone who enjoys a flutter.

The Crown Perth Winterbottom Stakes is one of Australia’s premier sprint races and always features a star-studded field of Group One horses. Held at Ascot Racecourse, this event isn’t only about the fillies, fashion also plays a big role, and along with the races there’s also the chance to show off your finery and win big for doing so.

Malaguerra a Favourite to Win

Victoria-trained, Western Australia owned Malaguerra is the favourite to win the $1,000,000 Crown Perth Winterbottom Stakes. Malaguerra has won two Group One races in quick succession and was first across the line in Melbourne and Brisbane. Racing in the colours of a Bruno Micalizzi, a retired Bicton fisherman, Malaguerra was named after a Sicilian warrior who was renowned for his sprinting prowess. It’s certainly proven to be an apt name, and this horse could well pip the others to the post on Saturday.

TABtouch has tipped Malaguerra to win, but has also said that currently, his biggest threat is Terravista, another Group One winner who’s also performed exceptionally well recently. In the field of 12, Terravista seems to offer the most competition, and Joseph Pride, his trainer is largely responsible for this horses other name: WBS, or Worlds Best Sprinter. The only thing that may hamper Terravistas chances are his previous foot issues, which put paid to a successful autumn campaign and saw Pride spending a large portion of the season getting him back to fitness.

A Race to Not To Be Missed

Chief Executive Officer of Perth Racing, Julian Sullivan has said that they are thrilled with the line up for the first stand alone edition of the day, and that the course is expecting to welcome more than 14,0000 spectators through its gates to view the event.

This years Crown Perth Winterbottom Stakes Day is sure to be unforgettable. Now that the final field has been announced there’s no doubt that the race will be a good one: