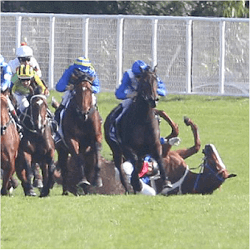 Rebecca Black’s death has once again highlighted how dangerous the sport of hose racing can be, but it wasn’t the first fall of the season. Fortunately, the other big fall did not result in the death of the rider, but it certainly made headlines at the time.

In April 2016 a horse and rider combination went down in a frightening looking fall on the straight at Randwick Racecourse. The pair was coming down the home straight near the back of the pack when it seems the horse, Single Gaze, had nowhere to go after another horse came into her line. Happy Hannah was brought over from the outside rail by Damien Oliver, which may have caused the group one winning chestnut mare Single Gaze to stumble.

Her jockey, Kathy O’Hara went down in the correct rolling position and sustained some serious although potentially not life-threatening injuries. She was taken off in an ambulance that screamed onto the track after the other horses had passed. In the hospital, it was determined that Kathy had received a broken collarbone, punctured a lung and broken ribs as well as a rather severe concussion. Kathy smiled and stated that it is all in a day’s work.

Single Gaze is one of Nick Olive’s Group One winning horses, so it was a big disappointment to see her go down at Randwick. She sustained severe bruising to her shoulder but luckily no broken bones or torn tendons. A tendon injury could potentially be a career ending injury for a thoroughbred. Olive got many vets out to see her, but they all had the same consensus, which was that she had only sustained bruising.

Single Gaze was rested for a long time, before tentatively being brought back into work. She looked to be possibly aimed at the Spring Carnival and the Cox Plate which has historically been a good race for mares with the likes of Winx, Makybe Diva and Sunline all winning the race at one point. Single Gaze turned out not to be sound enough, however and was given more time off. As of November 2016 she was just on the water walker a few times a week, but does look set to make a comeback next season, possibly for the Coolmore Classic

Kathy O’Hara wasted no time in bed and was back to work within a few weeks. Taking it easy, of course, the blue-eyed jockey began slow work as soon as she could. She was back to full riding within a few months. She has had a few rides so far in races but is still taking it a bit easy.

Single Gaze looked set to take on Winx at the Cox Plate, but her trainer decided that the mare was not quite ready yet. She has grown up a lot in her time off, which may actually have been one of the best things that happened for her. Providing that her injury does not prevent her from performing as well as she was, she may come back bigger, stronger, and ready to tackle the other well known horses such as Winx and Black Heart Bart.