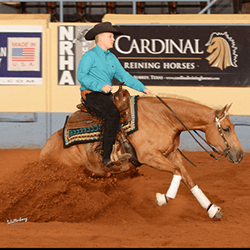 18-year-old Cade McCutcheon found himself being cheered on by the entire audience in the Johnson Controls Indoor Arena at the FEI Equestrian Games. McCutcheon, who hails from Aubrey, Texas, along with his 7-year-old mount Custom Made Gun, left the audience initially speechless thanks to their incredible display that included a clean, precise performance.

Fast circles, rollbacks, 360-degree spins, flying changes of lead, and sliding stops were al part of the show as McCutcheon earned his cheer that came soon after his performance had come to an end. The USA has dominated the event for the last four World Equestrian Games, which is considered the pinnacle of equestrian sports, and is held every four years during the middle of the Olympics cycle.

The first day of the two-week competitions brought in over 800 human and horse athletes from all over the world, including 800 grooms, and an estimated 40000 spectators per day. Athletes were under time pressure thanks to the looming presence of Hurricane Florence, which threatened to bring the entire event to a swift close.

The rain was heavy enough to wash out parts of the parking lot, and one endurance event was shortened due to a bad start and was eventually cancelled thanks to the weather. But despite the high humidity and dark skies, thousands of people attended the show and were blown away by the young rider from Texas. McCutcheon finished with a score of 229 points, putting him in first place internationally.