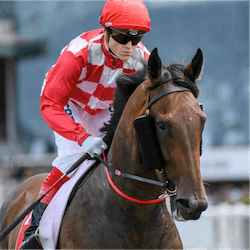 On Wednesday, David Hayes-trained filly Formality lived up to the promise she showed returning from a spell with two consecutive Group 2 wins over 1200m at Randwick in August and September, when she and jockey Kerrin McEvoy powered through a strong field of nine 3-year-olds to win the Gr. 3 Blue Sapphire Stakes at Caulfield.

McEvoy blames himself for Formality’s disastrous 11th of 14 finish in the 1400m Gr. 1 Golden Rose a month ago, but he got the ride right brilliantly once the distance reverted to the Blue Sapphire’s 1200m, confirming the 3-year-old’s potential as a champion sprinter.

Formality jumped off joint favourite at $3.90 with Jukebox, after the colt trialled well at Cranbourne on his return from a spell. However, the filly had the advantage starting in Barrier 4, while Jukebox jumped off from Barrier 9 on the offside rail.

It was enough of an edge to give Formality the win by a long neck, with Jukebox racing too hard at the start and relegated to second. Mick Price-trained colt Lone Eagle, out of Irish sire Zoffany, was a long shot at the post, on $31.00. Jockey Dwayne Dunn steered him to a surprise third, 1.25 lengths behind Formality.

Derby Day Next Up for Formality

Formality’s next start will be the Gr. 1 Coolmore Stud Stakes on Victoria Derby Day at Flemington on 4 November. It’s another 1200m sprint, and if the filly is allowed to set her own pace, as was the case in the Blue Sapphire, she’s going to be a strong contender.

She’ll be joining stablemates Catchy and Tulip for the Coolmore, and she could well have McEvoy in the stirrups again. The 36-year-old champion jockey has more than 40 Gr. 1 victories worldwide on his record, and he added The Everest to his win tally in its inaugural running at Randwick on 14 October.

In stud news, Formality has a 2-year-old full brother by sire Fastnet Rock and Japanese dam Jolie’s Shinju. He’ll be auctioned as Lot 174 in the NZB Ready to Run sale of 2-year-olds on 22-23 November, and his trial times to date should see him attract some competitive bidding.