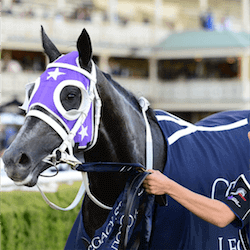 Chris Waller continued feeling the magic at the Royal Randwick on day 2 of the Championships. After watching Winx run her 17th straight win, Waller made it a training double with Foxplay taking the honours at the 2017 Queen of the Turf Stakes. While everyone was still counting up their cash from Winx’s Queen Elizabeth Stakes win, two runs later, her stablemate Foxplay scored another winner in the Group 1 $1 million Queen of the Turf Stakes.

The 1600m race was run this year as the Coolmore Legacy Stakes. The weight-for-age race saw both fillies and mares taking the epic mile sprint. With Foxplay across the line first, she became the first three-year-old to win the race since Forensics did it in 2008. This was also trainer Chris Waller’s first win in this particular event his first Group 1 success for Foxplay’s sire Foxwedge.

A Late Charge at the End

Kerrin McEvoy, who is no stranger to the Queen of the Turf Stakes himself, enjoyed his third win in just five races. He claimed victory riding Appearance in 2013 and then again riding Amanpour in 2015. Speaking to the press about his latest win, McEvoy said that Foxplay was an honest horse and deserved a Group 1 win. Over the past few races she had put up some big performances and had done a lot of prep for the race.

Coming off the back of a fourth placing in the Group 1 Vinery Stud Stakes, Waller managed to get Foxplay in peak form to take on the older mares. At the start of the race it was former Flight Stakes winner, First Seal who took the early lead, sitting a full head of the favourite Silent Sedition who was claimed the Group 1 William Reid Stakes in Melbourne. Foxplay was also in the mix but was caught deep out wide.

Silent Sedition was getting a brilliant run on the fence before being challenged by First Seal for the lead. Coming in from the wide barrier, Emancipation Stakes winner Zanbagh was tracking through midfield. Coming in on the straight it was a fight for the finish with Silent Sedition and First seal leading the charge. However, a late run from Fox play and Dixie Blossoms through a spanner into the works. Foxplay eventually pulled out in front and held on to beat Zanbagh who bolted down the outside while Dixie Blossoms came home in third.

Although these races may be over there’s still plenty for punters to bet on, and Sportsbet has some amazing specials, such as the NRL Rounds 8 bonus that will reward you with a 50% boost up to $50 in bonus bets if your team wins by 6 points or more.