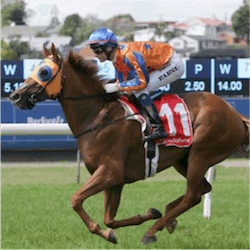 In a great day for the racing syndicate, two Te Akau-owned horses finished first and third in Saturday’s Group 1 New Zealand Derby for three-year-olds at Ellerslie. Furthermore, both were sired by Iffraaj, adding two more names-to-watch to the list of top performers among his offspring.

Jockey Opie Bosson, riding Gingernuts just two weeks after the gelding’s surprise win of the 2100m Avondale Guineas on the same course, handled the horse perfectly throughout the 2400m Derby. Well place in the midfield from the start, he made his move around the 800m mark.

Gingernuts battled to get past Savile Row, after the race favourite moved wide, then inside, then wide again. However, by forging ahead on a very wide outside line, Gingernuts pulled ahead and hauled in the front-runner, Australian gelding Rising Red. He won by a length, with Rising Red second and another Iffraaj-sired colt, Jon Snow, putting in a late challenge to take third by a nose.

At a starting price of $3.80, colt Savile Row started the $1 million Derby as the favourite, with a record of 2:3:1 from seven starts. Unfortunately, he faded after being overtaken by Gingernuts, and eventually finished 12th of 18.

Gingernuts started the race as second favourite, at $5.40, and the win brings his career record to 4:1:0 in seven.

The other race of great interest to New Zealand racing fans on Derby Day was the 2200m Nathans Memorial Open Handicap. Several of the horses fancied for this Saturday’s Group 1 Auckland Cup, one of New Zealand’s most famous races for stayers over 3200m, also took part in the Nathans Memorial, giving punters one last look at their form on the Ellerslie track before the big day.

Auckland Cup favourite Chenille is unlikely to slip in the betting before Saturday, after winning the Nathans Memorial by a length-and-a-half. None of the other horses near the top of the Auckland Cup betting were impressive, although El Pistola finished fifth. Pentathlon came in seventh, and Savaria 10th.

However, 7-year-old gelding King Kamada, who finished third in the Nathans Memorial, will probably see his Auckland Cup starting price improve from its current $20.00 before Saturday.