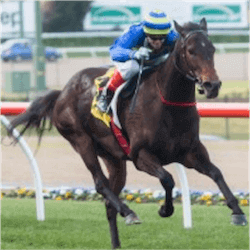 Girl Guide has become a firmly backed competitor at this weekend’s Sir John Monash Stakes. It is no surprise though as Girl Guide has had quite the prestigious run so far in her career.

This will be her third start for new trainer Claron Maher. However she was originally trained by Hayes and Dabernig from Lindsay Park. In her first race for Claron Maher she raced her Lindsay Park stalemate Sheidel and came a very close second at the Bel Esprit Stakes, which was an impressive finish against such a powerful horse.

The Rest Of The Field

She will be facing stiff competition from the rest of the field this weekend. Hayes and Dabernig will be bringing Fast n Rocking and Wild Rain to the Sir John Monash Stakes.

Fast n Rocking has received one of the highest rated nominations at the Sir John Monash Stakes despite just winning 1 of his last 17 races. Fast n Rocking has a 105 handicap at Saturday’s event, sharing the same handicap as the Patrick Payne trained The Cynic who will be making its debut.

Facing Down The Cynic

The Cynic may be a wild card this weekend that can potentially snatch the win from the field. It raced in Hong Kong as Bundle of Joy and took 6 first place finished out of 23 races.

Moving from Group 3 to Group 1, The Cynic finished second in a Group one confrontation against Peniaphobia.

Potential From Lord Of The Sky

Another strong challenge may come from Thermal Current who had a Golden Topaz victory.

Competitors To Look Out For

There will be 9 races on the day at the Sir John Monash Stakes. Horses to watch this weekend include Henry Dwyer’s Beirut and My Sister Lil who may be having an easy run in race 9.

In race 7 Duke of Brunswick and Ulmann will be dominating. Duke finished first at Caulfield with Ulmann a close second behind him.