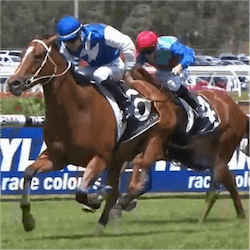 Local galloper Great Shot upstaged some of Australia’s best to win the Group 1 Railway Stakes this past weekend. Trained by Rhys Radford, Great Shot started as a $31 outsider but managed to hold of Scales of Justice after a brief scare at the 200m mark. He recovered well though and fought off five-time Group 1 winner, Black Heart Bart by just half a head in what was a thrilling finish. The $5 race favourite, Tom Melbourne came home in a close third to round up the trifecta.

Scales of Justice, who won last year’s Railway Stakes, sat just outside Great Shot but faded towards the end to come in a disappointing 12th. A post-race examination on the horse did not reveal any problems, however trainer Lindsey Smith said the horse would be spelled. For Rhys Radford, though, it was a fairy tale race and one that would definitely define his short career. It was just two years ago that Radford took over the reins from his father’s Warren’s Oakford stable.

The Return of a Star

Speaking to the press, Radford said he couldn’t believe he had won the Railway. He said he couldn’t get the horse any better than he was, so they were just hoping his best would be good enough on the day. He has never had a horse that is as tough as Great Shot or one that tries as hard, where others would lie down, Great Shot just keeps goings, but for now, it is going to take a day or two for the reality to sink in.

In June this year, it was feared that Great Shot would never race again. The Magnus five-year-old was diagnosed with kissing spines, a career-ending spinal condition which is where the tips of the spin touch or overlap. However, the horse responded well to treatment and completed a rigorous exercise regime to get him back into shape. Radford said that the horse has not been sound for many months but he came through when it mattered.

After winning the Belmont Guineas last year by more than four lengths, owners Frank and May Edwards received multiple offers for Great Shot all exceeding $1 million. They ultimately turned down the offers, a decision which has been vindicated by his latest win. He also improved his record with 8 wins from 24 starts and racked up a total of $1.13 million in prize money.