Your Guide to the 2017 Wellington Cup Carnival 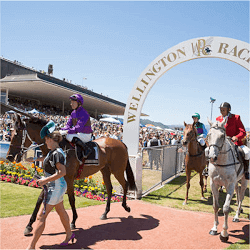 Getting ready for the 2017 Wellington Cup Carnival

In New Zealand, horseracing is one of the most popular online betting markets. In 2017, punters will get the chance to kick of the year with the Wellington Cup Carnival taking place from the 14 of January, running through to the 28th. The three-day racing event will open on Saturday the 14th with Super Saturday, one of the best racing days in the country. The day will consist of nine races in total with three “Black Type” races held at the Trentham Racecourse.

Day 1 is all about the racing with a top-class racing program that is headlined by the Group 1 Randwick Meats Levin Classic, the Group 3 Mills Reef Winery Trentham Stakes and the Group 3 Tui- Backing Handicap. The second race day will take place on the 21st of January which is the much anticipated Wallaceville Estate Wellington Cup Day. The Wellington Cup is one of standout days of the carnival and is considered to be one of the best racing days in the New Zealand calendar.

The Wellington Cup day showcases some of New Zealand’s best sprinters, making for an action packed day on and off the field. The Cup has been run each year since its inception in 1873. It is run over a distance of 3200 meters, severely testing the stamina of the leading stayers. In total 10 races will be held on the day including the group 1 J & N Berkett Telegraph, New Zealand’s richest open sprint race. In 2016, the 3200m Wellington Cup race was won by Mister Impatience with jockey Sam Spratt in the saddle and trained by Michael Moroney & Chad Ormsby.

The Carnival will end off on Saturday the 28th of January with the Interislander Summer Festival. This family fun day is a treat for the whole family with lots of entertainment for children and adults. The day will also include a total of 9 races headlined by the Group 1 Harcourts Thorndon Mile as well as the Group 3 Wellfield Desert Gold Stakes. With three full days of racing action, the 2017 Wellington Cup Carnival is certainly one of the highlights of the racing calendar and a big drawcard for local and international punters.