Harlow Gold To Be Tested at Australian Oaks 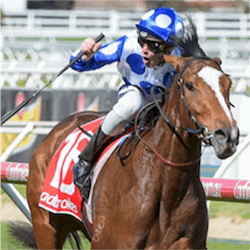 Harlow Gold Could Be Tested by Australian Oaks Wet Track

Randwick’s wet track on Saturday could well be the make or break for Group 1’s Harlow Gold in the $1 million James Boag’s 2400 metre Australian Oaks, day 2 of The Championships.

David Hayes, the Lindsay Park co-trainer, is not totally sure that Harlow Gold will be able to cope with this weekend’s wet ground, even though this Tavistock filly did manage to finish in the number 3 position behind Montoya’s Secret and Nurse Kitchen in the Group 1, heavy 9 surface, $500 000 2000 metre Vinery Stud Stakes Rosehill on the 25th of March.

A Competitive Horse on an Equitable Track

Hayes said that, ideally, the surface would be dry and that the wet conditions at Randwick were not the same as those at Rosehill, with the former being sticker, he felt. He added that, with a reasonable track, the horse would be very competitive.

Hayes went on to say that she was not confident with her Australian Oaks prep gallop at Randwick on Tuesday morning, but she “had a good blow”.

Randwick’s track got voted a heavy 9 on Wednesday after receiving over 68 mm of rain in the last week, and the Bureau of Meteorology has forecast more showers for the area leading up to the race this weekend.

Hayes, along with his son Ben and nephew Tom, with whom he trains in partnership, stated that Harlow Gold came through her Vinery Stud Stakes run in excellent order, and would have no problem finishing a strong 2 400 metre after she finished second in the Group 1 $1 million 2 500 metre Crown Oaks, to Lasqueti Spirit, at the Melbourne Cup Carnival Flemington race.

Harlow Gold has managed to draw barrier 12 in the 14-horse field of the Australian Oaks, and Mark Zahra has taken over Regan Bayliss on the $5 possibility on who is appearing on the second betting line at Ladbrokes.com.au. This is behind the filly from New Zealand, Bonneval, who stands as the $4.20 favourite, but Nurse Kitchen is certainly a contender at $5.50.